Essential thrombocythemia (ET) is a chronic hematopoietic system tumour, in the case of which too many platelets are produced in the bone marrow due to genetic changes in haematopoiesis. ET belongs to the group of myeloproliferative diseases. A thrombocyte or platelet is a very small blood cell with the task of participating in coagulation.

Essential thrombocythemia is characterised by:

Where there is a very large number of platelets, thrombosis risk is increased because they may obstruct smaller blood vessels due to their large number. Less often, haemorrhages may occur because platelet function may be impaired with the increase in their number.

The term ‘thrombocythemia’ describes an abundance of platelets in the blood. The term ‘essential’ indicates primary bone marrow disease, excluding other causes of platelet count increase, for example, infections, inflammatory diseases, operations, tumours, iron deficiency, absence of spleen. ET is a rare disease: around two new cases are diagnosed per 100,000 persons annually. Patients become ill mostly over the age of 60, but 20% of patients are less than 40 years old at the time of diagnosis. Among younger people, the percentage of women is bigger. Among older patients, the percentage of men and women is equal.

ET cannot be prevented and the causes of the disease are not yet completely understood. Most often, in around 60% of cases a change is found in the Janus-kinase 2 gene (JAK2) and in ROUND 30% of cases in the calreticulin gene (CALR). Less often, a change is found in the MPL gene with a similar mechanism of action. Gene changes are not found in 10-20% of patients and their impact on disease course and the resulting treatment options is still under scrutiny.

Many patients with ET diagnosis don’t have disease-related symptoms; increased platelet count in blood analysis is an accidental finding.

Often, the disease is found accidentally when there is a higher than normal number of platelets (≥450 x 109/L) persisting for at least two months and other causes of increased platelet count are excluded. Values of other blood parameters – leukocytes, haemoglobin, haematocrit and erythrocytes – may be normal. For diagnosis confirmation, bone marrow samples should be taken with proliferation of megakaryocytes (progenitors of platelets) for ET. Enlarged spleen may be felt during abdominal palpation.

ET is a chronic disease that cannot be cured. In treatment planning, disease symptoms and thrombosis risk are evaluated. Patient without symptoms and disease signs and low thrombosis risk may simply be monitored. In patients with high risk of complications (e.g. prior thrombosis, age over 60, cardiovascular diseases or their risk factors, etc.), the main treatment aim is to reduce the number of platelets. This reduces thrombosis risk. For thrombosis prevention, lifestyle risk factors should be minimised (stopping smoking, reducing weight, keeping blood pressure within normal limits, exercising regularly).

What the patient can do themselves

Maintain a normal weight and do regular physical activity (at least 30 minutes of walking every day). Avoid prolonged stress position, e.g. sitting (before travelling consult with a doctor). Consult with a haematologist when planning pregnancy and getting pregnant. Eat a healthy, balanced diet, avoid fatty foods. Keep blood pressure, cholesterol and blood glucose under control. Do not smoke.

Mean survival in patients with ET diagnosis is almost equal to that of the general population but depends largely on the treatment results of the specific patient and their age and concurrent diseases. With treatment, the disease is often stable for over ten years. Over the years, ET may progress to myelofibrosis and in 1-2% of patients to acute leukaemia.

In the case of myelofibrosis, bone marrow is gradually replaced by fibrotic tissue and less and less space is left for normal haematopoiesis. Blood cell production is partly transferred to the spleen, causing its enlargement. With time, the number of blood cells may reduce significantly, therefore patients sometimes become dependent on transfusions of blood components. In the case of acute leukaemia, proliferation of blasts (immature tumorous cells) occurs, leading to a worse prognosis.

It is not possible to influence the course of ET as a disease, but it is possible to prevent complications caused by the disease by following the doctor’s recommendations exactly and leading a healthy life. 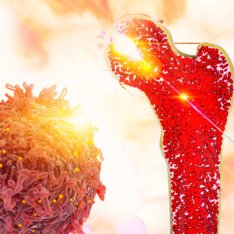