Leukaemia (Greek for ‘white blood’) is a cancer of the blood and bone marrow. Popularly also known as blood cancer.

The human body consists of many cells (a total of 100,000 billion cells). In the body, the cells are constantly renewed, replacing old, tired cells with new ones. During their life time, cells produce a lot of cells similar to themselves. To regulate reproduction and to guarantee that there are constantly a sufficient number of different cells, each cell has a so-called signal that announces the reproduction need. When the signal is on, the cell reproduces; when the signal is off, the cell doesn’t reproduce.

It is normal that some human cells mutate genetically. These genetically mutated cells have the reproduction signal turned on permanently, making them potential cancer cells. Throughout the body there are control mechanisms in place which destroy the mutated cells so that they cannot reproduce. When the body is under strain for some reason (disease, stress), the immune system becomes weaker and the cell control mechanisms don’t work any more. So the mutated cells remain in the body and start to multiply uncontrollably. Genetically mutated cells are stronger than healthy cells and later the body is no longer able to destroy them. This way, cancer develops.

This also applies to leukaemia. In a healthy body, new blood cells, including white blood cells, are constantly produced in the bone marrow. A weakened immune system enables genetically mutated white blood cells to multiply uncontrollably, crowding out normal cells. Different forms of leukaemia can be distinguished depending on which type of white blood cells mutate and become cancerous. In any case, the composition of the blood is changed as a result of the disease to an extent that can be life-threatening.

There are four forms of leukaemia:

What is the difference between acute and chronic leukaemia?

What is the difference between lymphoid and myeloid leukaemia?

In myeloid leukaemia, monocytes and granulocytes are multiplying. Their task in the body is to destroy foreign bodies, for example, bacteria. When multiplying uncontrollably, they destroy too many foreign bodies, overbalancing the body, and this is lethal. 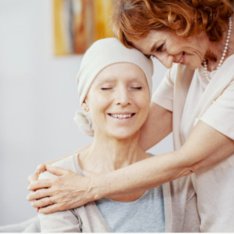